If Studio decided to divide by zero

The Error occurred in file ... Attempted to divide by zero error appears when you try to import a WSXZ package. The error is rare: Google knows about it by hearsay, and even if you use the link, you will find the description of termbase issues, but the real reason turned out to be different.

The exact origin this issue is unknown, but it is related to some problems with the XLF file structure. Surprisingly, the problematic XLF file itself gets opened as intended (in our case).

First, you should inform your client about the issue. If the client is unavailable or has no idea about how to solve it, perform the operations below. Their common purpose is to retrieve the XLF file from the package and translate it separately. The order of actions is as follows:

The instruction seems long, but it takes actually longer to write than do what it tells: it is important to understand the purpose of each action though. And if your XLF file is small and the translation memory does not reduce the amount of work, you can translate it by opening in Trados Studio directly, i.e., even without creating a project.

If you know a more humane method, please share.

A very easy recovery of Trados Studio performance after the Access to the path 'F:System Volume Information' is denied error

Given that, it doesn’t import the package, the project doesn’t appear in the list, and it is impossible to work. At the same time, the System Volume Information folder is in the drive indeed, but it is hidden, and who knows how it is connected with Trados Studio projects.

It is not entirely clear what causes this error; however, it’s quite easy to fix:

This method works in Trados Studio 2015 and 2017, but it has to work in other versions too.

Only the patient win the battle for clipboard!

While working in Trados Studio (and with texts in general), one has to perform numerous copy and paste operations through pressing CTRL+C and CTRL+V key combinations (you don’t copy texts with the help of your mouse, do you?). Translators are constantly looking up terms in dictionaries, reading specialized articles in the Internet etc.

However, an attempt of doing so sometimes results in Trados Studio displaying a message as follows:

In other words, for some reason Trados Studio refuses to copy a text fragment to clipboard.

Usually, this error is caused by another program (for example, Punto Switcher or a clipboard manager) “fighting” with  Trados Studio for the right to be the first to run the copy command.

The easiest method to get rid of this error is to copy the fragment again, taking your time :) Mostly, it is enough.

If you want to get rid of it completely, you’ll have to remove or disable the competitor program.

If Trados Studio refuses to open the correction window in a direct route, there is a way around.

Trados Studio allows to open many SDLXLIFF files at once. To do this, you have to check Include subfolders in the Files mode at the left: 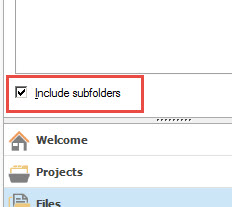 Then at the right, in the file list, select several files having the SHIFT key pressed or select all files in the package at once by the CTRL+A command, right-click, and choose Open For Translation (or Open For Review—depends on what you are going to do) in the drop down menu: 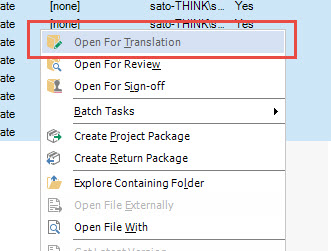 In this, all segments of all the opened files will appear as a single longread as if it were a single gargantuan document.

However, if one presses the CTRL+H key combination to open the Find and Replace window for massive correction, Trados Studio occasionally gets exasperated and gives out this message—yielding little information, as usual:

What it is that Studio is mad about remains unclear. It has been noticed that this message appears following the attempt to open an autocorrect dialog box.

The solution is easy: you should take advantage of the fact that autocorrect and search boxes are technically different tabs of the single window though called out with the help of different commands. Thus, open the search box first by pressing CTRL+F: 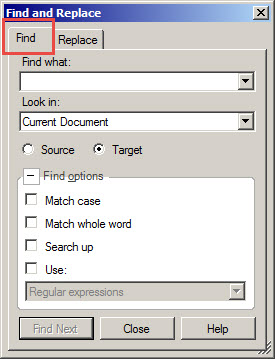 As a rule, there are no problems with that. Then just choose the second tab, Replace: 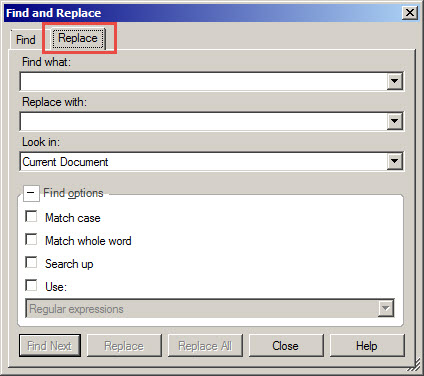 It is notable that this second tab may even not appear after calling up the search box. But it appears when you press CTRL+TAB.