If Studio decided to divide by zero

The Error occurred in file ... Attempted to divide by zero error appears when you try to import a WSXZ package. The error is rare: Google knows about it by hearsay, and even if you use the link, you will find the description of termbase issues, but the real reason turned out to be different.

The exact origin this issue is unknown, but it is related to some problems with the XLF file structure. Surprisingly, the problematic XLF file itself gets opened as intended (in our case).

First, you should inform your client about the issue. If the client is unavailable or has no idea about how to solve it, perform the operations below. Their common purpose is to retrieve the XLF file from the package and translate it separately. The order of actions is as follows:

The instruction seems long, but it takes actually longer to write than do what it tells: it is important to understand the purpose of each action though. And if your XLF file is small and the translation memory does not reduce the amount of work, you can translate it by opening in Trados Studio directly, i.e., even without creating a project.

If you know a more humane method, please share.

No termbase, no problem

MultiTerm is unable to create the termbase

This error sometimes flies out in Trados Studio when you try importing a WSXZ package exported from SDL WorldServer.

The reason for this error is simple: there is no target language in the structure of the termbase in the package. In other words, this is not the terms in the target language you lack but the language itself. Thus, you can simply delete the termbase—it won’t be at all helpful during translation. No termbase, no problem.

The method for getting rid of this error is easy:

If you use Total Commander, you can remove a file from the archive directly, without renaming and unzipping.

After these operations, the WSXZ package will open without issues in Trados Studio.

There are different methods for cutting a big SDLXLIFF Trados Studio file into several smaller ones. You can use a plugin designed specifically for this, SDLXLIFF Split/Merge.

But be careful. It is terrific at splitting (to be completely honest, not that terrific, often rather whimsical) and terrible at merging.

A painful case of practice: we receive a project in Trados Studio containing one large file, we cut the file with the plugin, we translate the parts, merge them, proofread, and deliver. Everything seems fine. In a week, a displeased client informs us that 600 words of the source (!) text and the corresponding translation have vanished from the file.

The investigation discovers the culprit: it is the plugin. It split the file into pieces and then left some of them aside when merging after the translation. It simply deemed them unworthy.

The merged SDLXLIFF file was generated not properly. However, there were no error messages, and Trados Studio did not notice any manipulations and welcomed the file. We had a hard talk with the client.

We have since used SDLXLIFF Split/Merge for splitting only. And we merge with Trados Studio itself, according to the algorithm:

Some issues may arise, but they are far not that critical as text loss.

Yet, it was one of the early versions of the plugin—the case happened about three years ago. Modern versions may be rid of this childhood disease already.

Act one is here and also on our Telegram channel.

A very easy recovery of Trados Studio performance after the Access to the path 'F:System Volume Information' is denied error

Given that, it doesn’t import the package, the project doesn’t appear in the list, and it is impossible to work. At the same time, the System Volume Information folder is in the drive indeed, but it is hidden, and who knows how it is connected with Trados Studio projects.

It is not entirely clear what causes this error; however, it’s quite easy to fix:

This method works in Trados Studio 2015 and 2017, but it has to work in other versions too.

The message The requested data file could not be located appears when one is trying to start Trados Studio. It is extremely laconic: what file exactly she lacks, where it must be located, why she needs it—who knows.

This problem can occur in any version of Trados Studio, even 2021, usually after the upgrade installation. SDL states that they have already fixed this in Trados Studio 2021 SR1.

To get rid of this error:

1. Close Trados Studio (if you have miraculously managed to start it).

2. Search the hard drive for the following folder:

4. Start Trados Studio. When starting, it must create another file with this name and work normally.

The process is described in details here.

There is a simple way to extract .sdlxliff from Trados Studio package

1. Like .mqxlz, an .sdlxliff file is actually the renamed .zip archive. Add the .zip extension to it.

2. Extract everything from this .zip file.

Inside, there are several folders. Two of them (if your package is bilingual) correspond to the source and target languages and are named according to the language codes. For example, if you translate from English into Ukrainian, your folders are named en-US and uk-UA. The .sdlxliff files you need are in the folder of your target language.

Note: This procedure is the same both for incoming and return Trados Studio packages. The only difference is in the fact that there is no translated text in the incoming package.

Trados Studio can be used to translate .txlf Wordfast files.

If you do not have or do not like or do not work in Wordfast, you can translate its files in Trados Studio.

Trados Studio knows well how to process different file types (Word, Excel, HTML and many, many others). To teach your Trados Studio to work with TXLF Wordfast files means to explain it what those files actually are.

A TXLF file is actually a standard XLIFF file with changed extension. So it is enough to add a file mask to the other existing XLIFF files in Trados Studio settings.

To do this, select File > Options: 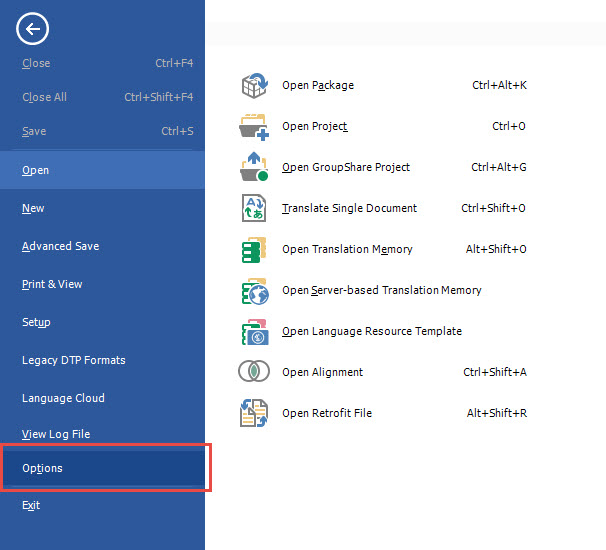 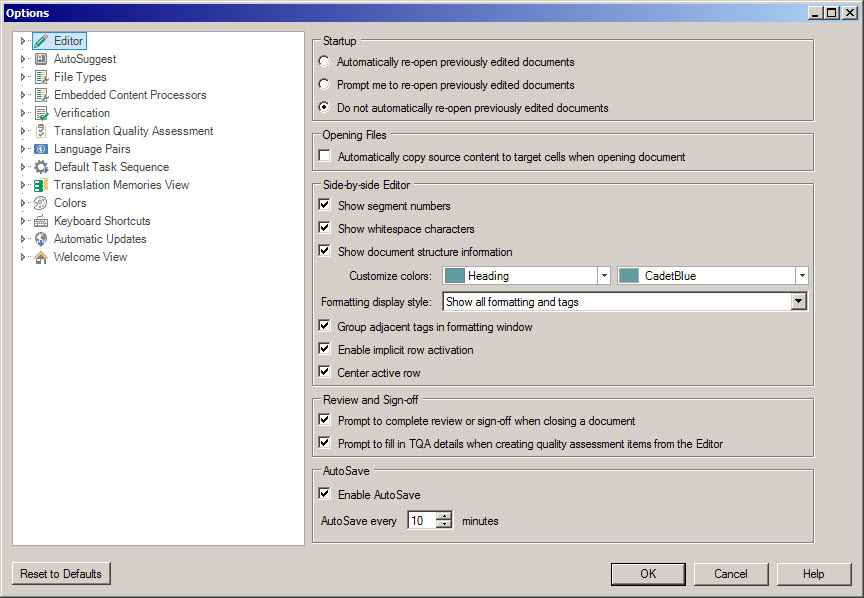 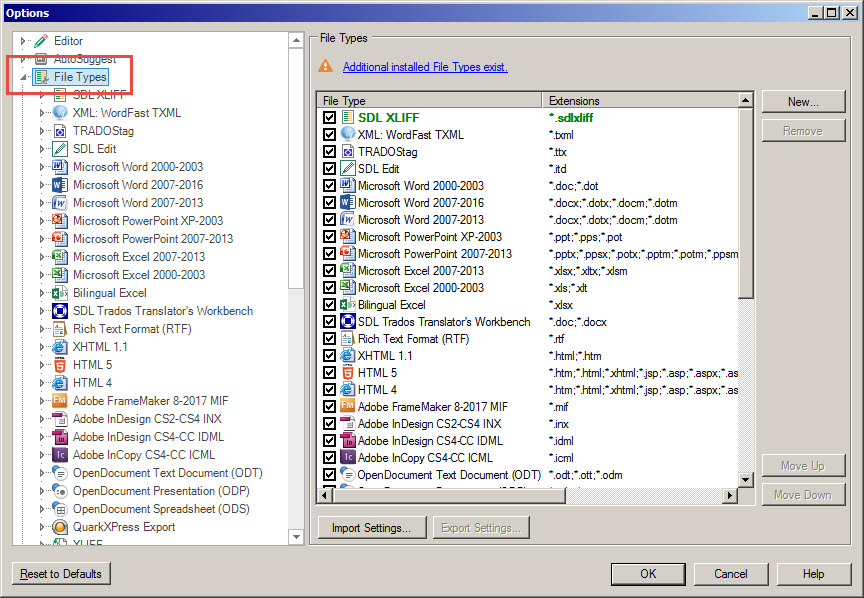 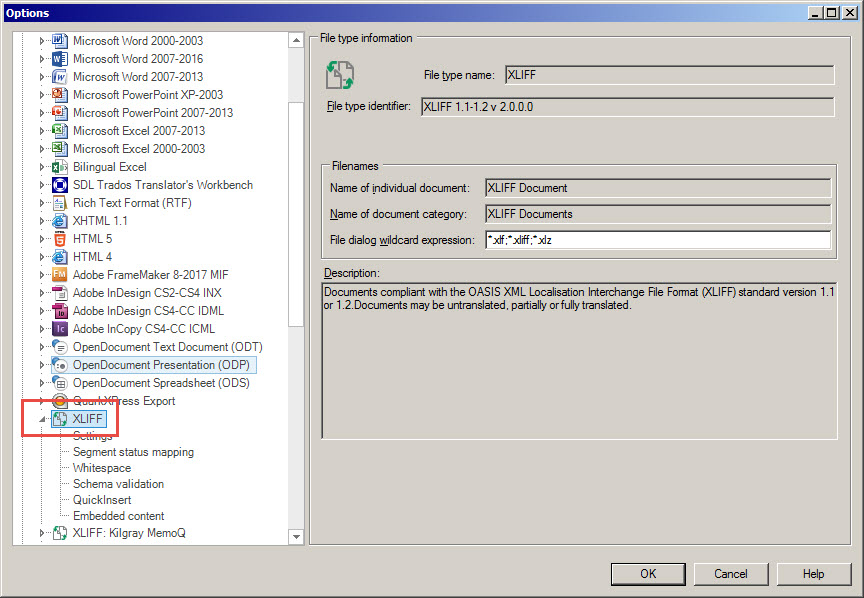 On the right pane, all possible XLIFF files extensions are listed. What you need to do is to add a mask for TXLF—;*.txlf:

Then, click OK. That's it: now your Trados Studio is able to work with TXLF Wordfast files.

After Word, memoQ, and Wordfast, we get to Trados Studio. Here is how to enable and configure spelling check in SDL Trados Studio.

(The screenshot is made in Trados Studio 2014, but the process in the higher versions is similar.)

We advise to set the check box Check spelling as you type, so Trados Studio will underline spelling errors with red immediately after typing a word. Lower, you can specify whether spelling errors in locked segments, 100% matches and CM/PM matches are to be ignored. 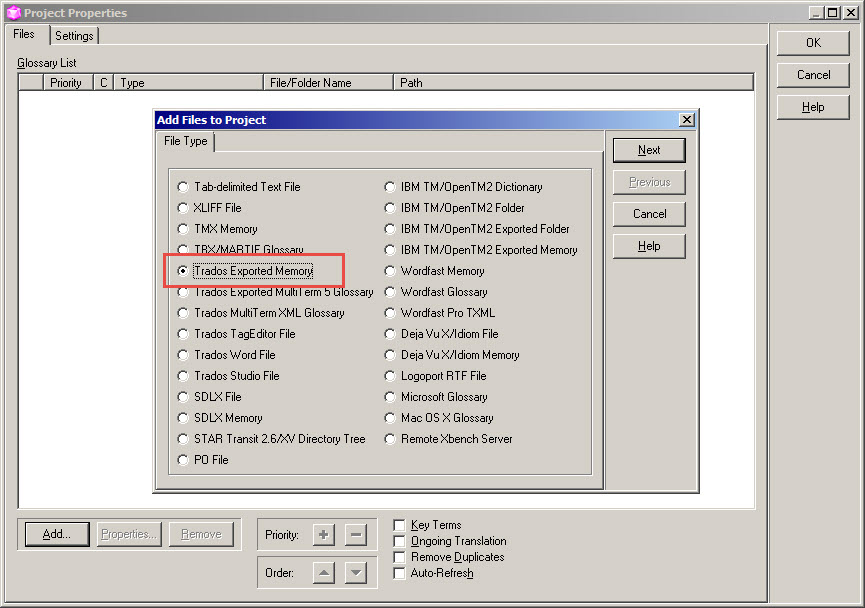 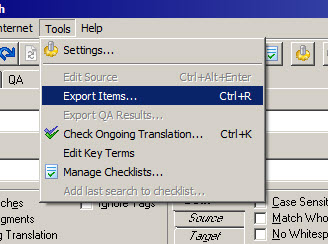 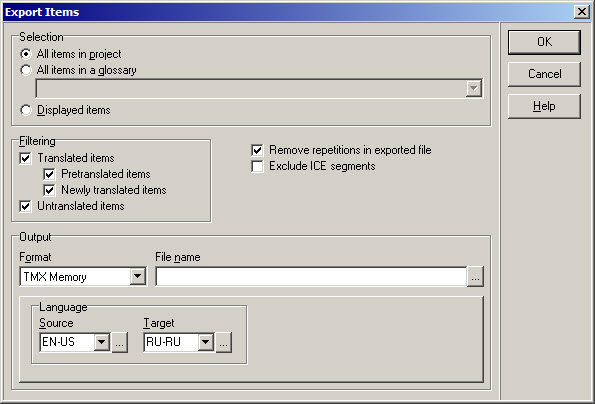 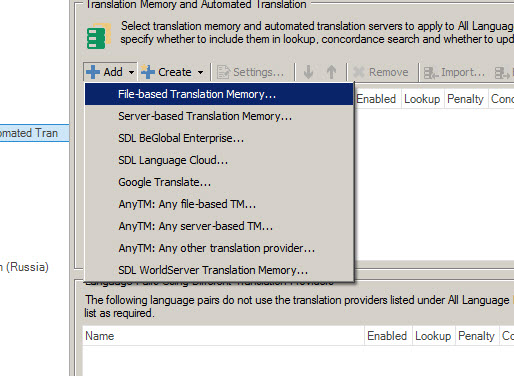